All photos by Alan Husband.

The poet William Blake said “the thankful receiver bears a plentiful harvest” (1). If he was right, then the visitors to the Exotic Excess Café at Groundwork (2)’s Harvest Stomp Festival (3) this Autumn Equinox are now very well provisioned. The Café, run by community interest group This is Rubbish (TiR) (4), was perhaps inaptly named as we were not selling anything but giving away huge amounts of surplus fruit and vegetables. As the autumn sun shone down on the tightly trimmed grass of the Queen Elizabeth Olympic Park in Stratford, London, we could hardly move for interested and thankful visitors and happy festival-goers.

The festival had many diverse stalls, from bee-keeping demonstrations with honey harvests to vegetable competitions for home-grown harvests. At the Exotic Excess café, however, we were focussing on a slightly different kind of harvest. As an estimated 36% of the food purchased in the UK goes to waste before it even reaches the consumer (5), there is a huge potential to intercept this and re-direct it to people who need food. As I have already explored through my work with the Gleaning Network (6) and the Food Waste Collective (7), there are a number of different strategies already operative in the UK for how to do this.

A key aspect of any food redistribution work is (unsurprisingly) sourcing the food and then finding hungry people to give it to. Perhaps of equal importance is the way in which we perceive and react to our food. If we show appreciation and thankfulness we are probably more likely to give value to the stuff we eat and see it as a worthy substance that should be used carefully and responsibly, rather than as a commodity. One fantastic way of doing this is to have a celebration! So that’s exactly what we did…

Talking about the Food

As we currently produce around enough food in the world to feed 12bn people (7). This coupled with the estimated 30 – 50% of food which is wasted annually on a global scale (9) shows starkly that food scarcity is an illusion and better organisation of food systems is necessary.

However, if we confront people with only facts such as those stated above, there is a chance of creating feelings of anger and/or helplessness. We prefer to inspire – which is why we have Exotic Hostesses serving up intercepted food on silver trays, and encourage communal eating in shared appreciation with a finale of a giant Salad Toss – where we entice members of the public to aid in creating a salad so large it has to be tossed in a tarpaulin. 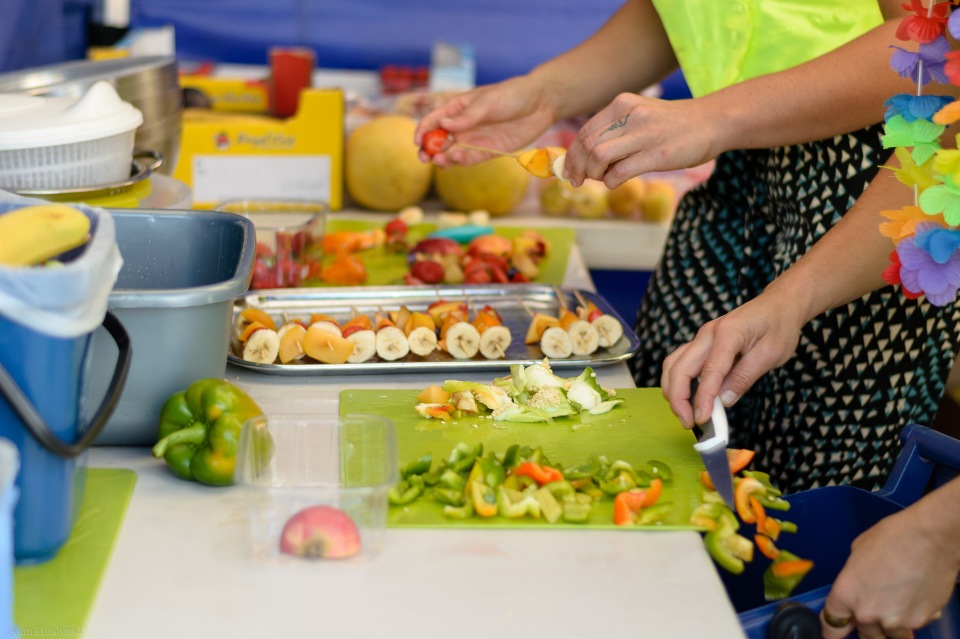 Preparing Fruity Sticks, and for the Great Salad. Photo by Alan Husband.

When I participated in the Exotic Excess Café last July at the Waterloo Food Festival (10) the predominant food stuffs we had intercepted was bananas, apples, peaches, grapes, oranges…In other words, fruit, fruit and more fruit. This year, we had many more vegetables to redistribute, including numerous packets of rocket and crates of lettuce, as well as carrots, courgettes and peppers. Thus the Salad was a savoury one, but we still had many many fruits to distribute, which we did in the form of make-your-own Fruity Sticks (a hit with the younger visitors) as well as inviting passersby to collect from our “shop” – actually, freely available produce for anyone to take and consume.

Who Could Resist? Photo by Alan Husband. 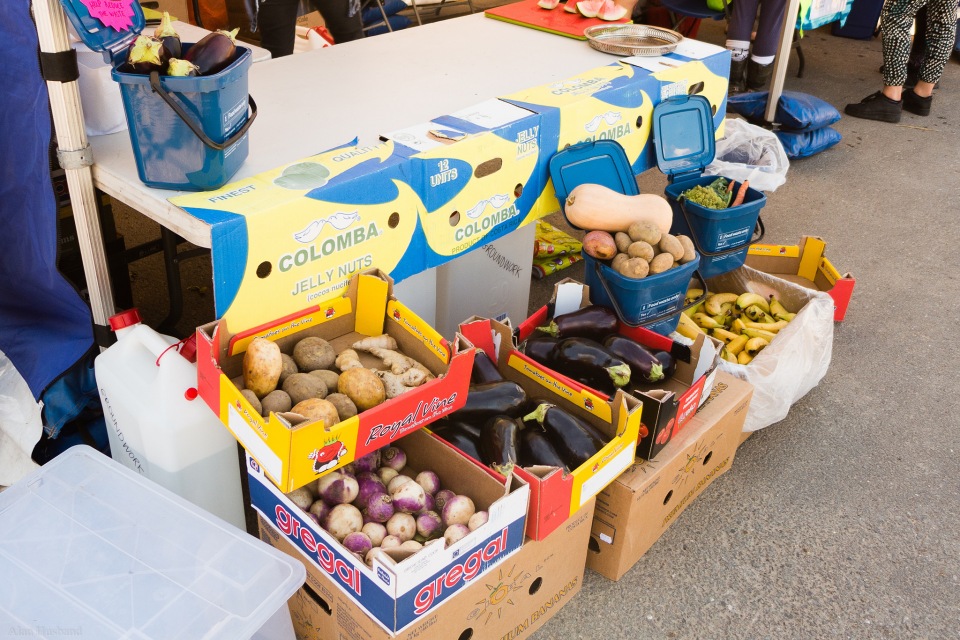 A Glimpse of Abundance. Photo by Alan Husband.

Excess to no Excess

At many food surplus events I have worked at, we have excess food at the end which it is a puzzle what to know to do with. I still have some kilograms of dried corn left from last September’s sweetcorn glean (11), waiting to be polenta-ed; and we were definitely far from taking all of the corn which was going to waste on that day.

However, the vibrant volunteers, along with the warmth of the day and the irresistibility of taking free food (especially when it’s been sprinkled with edible glitter) meant that the event was a great success. Once the festival-goers had got over any confusion or even suspicion about why we were not asking for money, most took to the idea with pleasure. So when we began gathering people for the grand finale, the Great Salad Toss, we ended up with quite a crowd of about twenty to take on the noble role of holding the tarpaulin while the salad ingredients were poured in.

Helping the Sultan to entice people to give a toss. Photo by Alan Husband.

Salad tossing can be a tricky business, and with such a giant salad it has to be seen as a precise art. Luckily we had This is Rubbish’s Sultan overseeing affairs, and the tossing went smoothly with much enjoyment from the crowd. 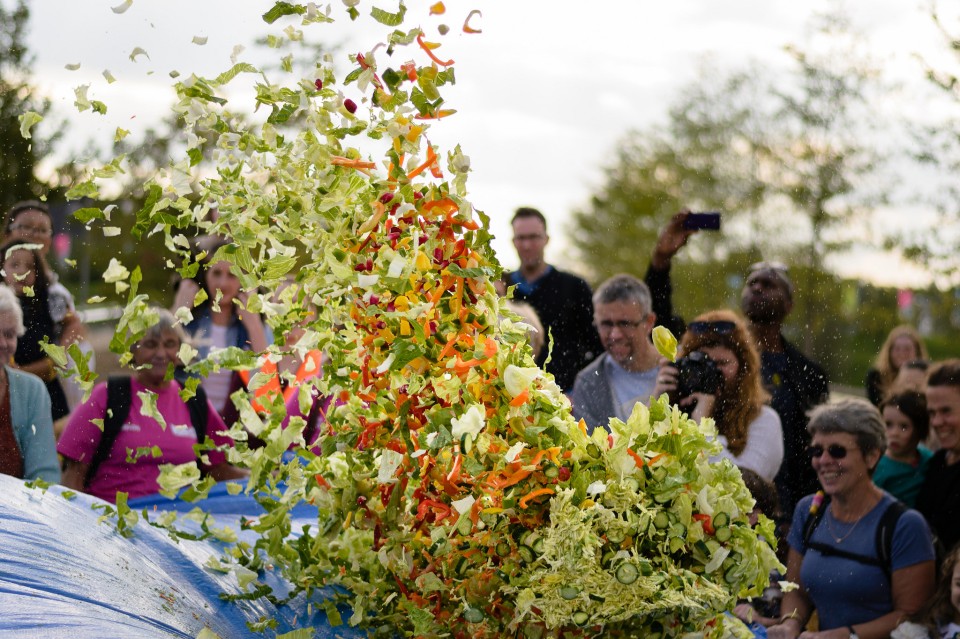 All feedback I received on the day was positive, and we collected many ‘food waste pledges’ from people inspired to take personal, practical steps towards reducing food waste in their own lives. There will probably be more Exotic Excess Cafés to follow – check out the TiR website (4) for more information – yet ideally, we shouldn’t have to run such events at all, if we all begin using food in a responsible and respectful way.

To this end TiR have many other projects including the brand newly launched ‘Stop the Rot’ (12) campaign, aimed at influencing government and industry to introduce new ways of dealing with food which will reduce the amount of waste in the UK. In order to be effective the campaign needs as much publicity from the British public as possible, so feel free to spread the word. Even if you do not feel you wish to place your energy into national politics, remember that all government action is ultimately decided by what the citizens of a country do – or don’t do.

All change begins at a personal level, and in this time of harvest it is worth noting the abundance around us and perhaps changing our perceptions to envision and act towards a more fruitful future.

All photos by Alan Husband. Want to see more of the day? His Flickr album is here: Harvest Stomp on flickr.