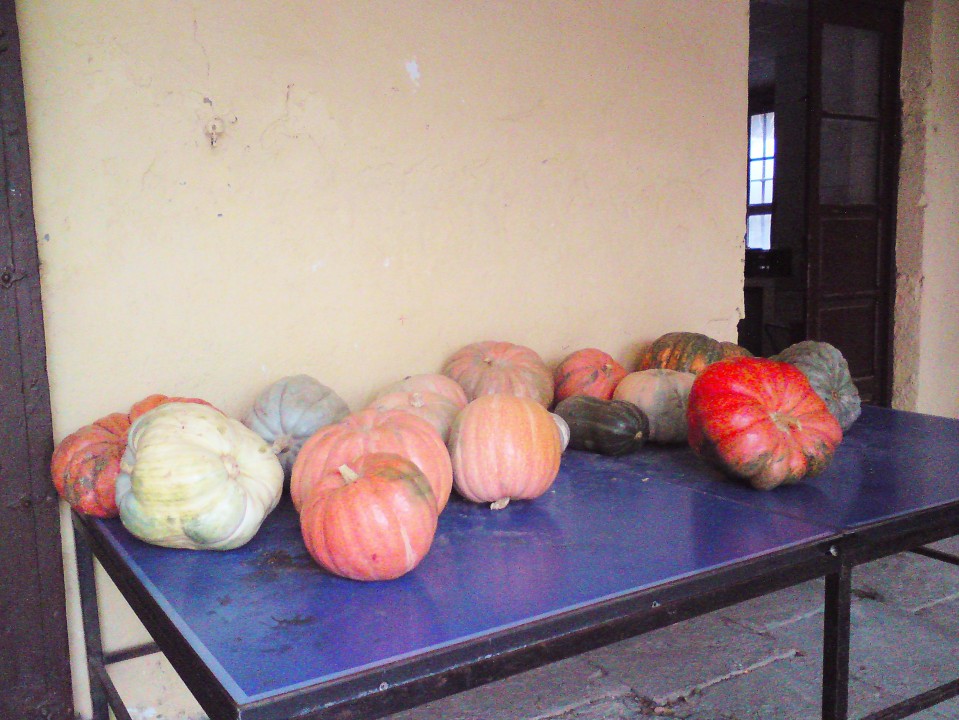 Pumpkins – A Potent Symbol of Samhain and the seeds we are carrying within us. Photo by Charlotte Haworth.

As we approach once more the mid-point between the Autumn Equinox and Winter Solstice, known by many modern cultures as ‘Halloween’ and by some pagan traditions as Samhain (pronounced ‘sa–ween’), the beginning of winter, it seems a fitting moment to be reflecting upon what we have been harvesting throughout the year, both physically and metaphorically.

Samhain, October 31st, is celebrated by some as one of the most important feasts of the year, being a time where it is said that any magic practised is more potent, when “spirits” can be easily felt, and when communication amongst ourselves is enhanced (1). Whatever your own personal opinion on this matter, if you live in the Northern Hemisphere, you probably feel at least some kind of tingling expectation – don’t you? –at the fresh chill beginning to paw at you in the morning air; at the scent of wood-smoke drifting through the trees, and the glorious red-gold-amber spectacle of gently dropping leaves.

It may be interesting for those living in Britain to note that although relatively few people in the British Isles still know the traditions of Samhain, the festival is ceebrated in Galicia, Northern Spain, as ‘Samaín’ – showing the strong cultural ties we share and the similarities in our symbologies.

Last week, an important step was taken for the co-ordination of growers in the UK and Ireland, as the Gaia Foundation (2) released their preliminary report on the feasibility of creating a UK and Ireland-wide seed programme, enabling increased communication, education and resource mapping throughout the UK and Republic of Ireland. The report shows that all involved feel that such a programme will be highly useful to help growers, farmers and co-operatives to network, and encourage wider participation amongst growers of all kinds in the seed-saving process (3).

Such a task has many perspectives and is not necessarily simple, especially when you take into account (as the report does) the difference between ‘organic’ (not using chemical products) and ‘certified organic’ (with a designation from a body such as the Soil Association) and the pros and cons of F1 hybrid seeds, and whether or not it is useful to produce them along with Open pollinated (OP) seeds (3).

Nevertheless, the report is clear on the fact that growers, campaigners, farmers and other interested seedy people throughout the land believe that a network can help to break the hold of multinational companies on the seed market who are contributing to a loss of agro-biodiversity, and instead encourage a community of commercial growers who are interested not only in short-term profit, but in regeneration of land, soil and ecosystem preservation, and genetic diversity.

For the next 6 weeks we shall be living in increasing darkness as the sun shines for less and less each day, culminating in the shortest day of Yule or Winter Solstice on the night of December 21st. It is a time traditionally for gathering around the fire and telling stories; imagining new beginnings and preparing for the return of the sun. In our modern societies such connotations are perhaps little more than metaphors, but they can be powerful ones even so.

Whether you are planning some pumpkin carving, a spooky party, a magical ritual or simply a normal Saturday night, Samhain seems an apt time to deepen connections amongst family and friends, and to begin new ones.

Whatever seeds we have at this time, if we nurture them now, they will grow strong once their time comes. There’s no need to hurry, though; the time of darkness is also a time for patience.

If you wish to see the full report, please feel free to request it from me using the ‘Contact’ page.