This past week we have gone through a key moment in the solar calendar as the balance of light begins to tip inexorably towards more light and less dark. Many traditions celebrate this time as one of the “quarter days” in between the Winter Solstice and the Spring Equinox. The exact date changes depending on where the sun is but is usually celebrated (by those who still pay attention to these things) between the 1st and 3rd of February. The festival, known most commonly as Imbolc – pronounced “ee-molk” – is a recognition of the changing of the seasons; a time when life begins returning after the winter months, and when the ground begins to warm up sufficiently for seeds to be planted.

It is fitting, then, that the first Sunday of February every year sees the return of the UK’s largest seed swap, Seedy Sunday (1), held this year on Sunday 1st February in its usual location of the Brighton Corn Exchange. Seed swapping is an important way to help you to grow more and stronger varieties, and to help to preserve genetics of existing varieties as more than one person will plant them. 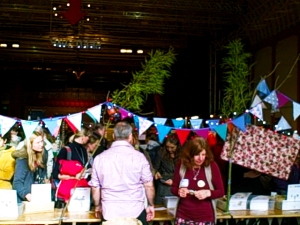 Er…why don’t I just go to the garden centre?

When you save seeds from your crops using open-pollinated methods you are preserving the variety of plant – be it flower, vegetable or other crop – and thus ensuring that the plant’s genes can continue to the next generation. By doing this you make the variety more stable and also you create a seed which is adapted to whichever environment you have grown it in, so you know it will do well there. However, being open pollinated, the seed will also easily adapt to other environments.

If you are a grower but you do not save seeds you will have to keep buying new seeds from a commercial company. There are very few commercial seeds available which have been produced using open pollinated methods; indeed, under EU regulations, it is currently illegal to sell such seeds without registering them for ‘Distinctiveness, Uniformity and Stability’ (2) and proving that the variety is ‘commercially viable’ (3). As open pollinated seeds are usually non-uniform and adaptable this is usually not possible; so the vast majority of commercial seeds which are available to buy will have been produced using other methods, usually hybridisation.

Such techniques are fantastic for producing a clear strain of crops which will all crop at more or less the same time and which need a specific environment to grow in, hence their popularity with farmers growing on a large, intensive scale. However, when you grow crops from hybridised seeds it is very difficult to save seeds successively from them, as the offspring of the plants will revert to either one or other of the parent genes and your seeds will not be true to type. If you want it to be worth planting your seeds – and even on a small, home scale it is still important that you utilise your energy and resources efficiently and effectively – there is little point in planting seeds which have been produced from a hybrid parent, as you have no idea how they will turn out. This, conveniently for the commercial seed companies, means that you have to keep going back to them for your seeds year on year. So seed swapping is beneficial even for no other reason than financially. For more on why it may be a good idea to save seeds, as well as practical ways to get the best from your saved seeds, please see my articles here and here . 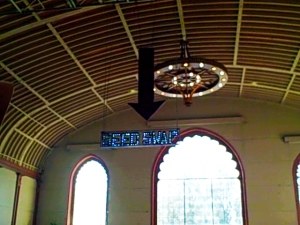 This way for seeds! Photo by Charlotte Haworth

Brilliant! So how does it work?

One of the main ideas of Seedy Sunday is to create not only a space for people to come and exchange seeds, but to encourage education on issues around seed saving and exchanging, as well as creating links and networks with different groups from around Brighton and even further afield. The Corn Exchange (part of Brighton Dome) is a vast hall, almost ample for the number of different organisations who came along – although this year the event is growing so much that we had to have a few stalls in the foyer and cafe. On entering the Corn Exchange one is greeted immediately by a large barrow, alluringly spilling vegetables, from Barcombe Nurseries (3); then, after purchasing your ticket, which sets you back three pounds, you walk between light-bedecked twinkling trees – very appropriate for Imbolc as a time of celebration of light – and into the hall itself. 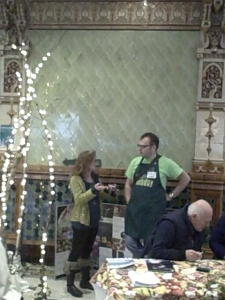 Lights in trees greet the attendees. Photo by Charlotte Haworth

This year we hosted around 54 different groups, from commercial sellers such as Infinity Foods (our main sponsor) (4) and Foodshed (5) to charities such as RSPB Brighton (6) and Sussex Wildlife Trust (7); gardening groups such as Craven Vale and Whitehawk Allotment Society and Moulsecoomb Forest Garden (8); as well as exciting organisations involved in work to help people become more aware of food, seeds, and their role in gaining the most from them such as Brighton and Hove Food Partnership (9) and Brighton Permaculture Trust (10). All these, as well as campaigns like Beyond GM (11), and then organisations who may be more expected at a seed swap event: people selling plants and seeds such as Pennard Plants (12) and Special Branch Tree Nursery (13).

Along with the stall-holders came a whole host of activities; things to make, such as Seed Freedom’s (14) seedbombs, things to see, such as the numerous plant varieties on sale, and even taste, such as the recipes being demonstrated by the Community Chef (15), and the large selection of honeys on the Blackman Bee farm (16) stall. Children’s activities were also on offer from the Slow Food UK (17) stall and Infinity Foods Cafe (18) were set up in the corner for anyone fancying a breather. And a breather may well be necessary; having weaved your way with fascination amongst the numerous stall holders, you still have not yet come to the helpfully signposted Seed Swap table itself.

On arriving at the Seed Swap table, first thing to do is hand over your own home-saved seeds – if you have any. In previous years the Seed Swap has accepted pretty much anything which people bring, though we have decided to become stricter on which seeds are allowed at the Swap as we realised that some are not worth swapping. For example, commercial and other seeds from hybridised plants have much less value as they will only produce one crop whereas open-pollinated seeds can theoretically be re-grown every year. If you have not saved any seeds, you can still participate in the seed swap; all seed packets are given away for a donation so even first-time growers can get started. 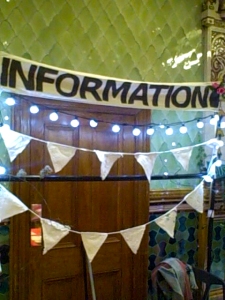 As well as the seed swapping aspect, a key part of what makes Seedy Sunday special are the talks, helping to raise awareness of issues around seeds and seed saving, and enabling people to broaden their education on such matters. This year the ‘star speaker’ was a lady from the television – oh yes, we even have celebrities! Her name is Christine Walkden and she participated in a ‘Q&A’ session on gardening tips with Steve Bustin, this year’s chair of the Seedy Sunday Committee.

For those less star-struck but still thirsting for knowledge, we had talks on how to save seeds successfully from Pat Childerhouse and growing seed potatoes from Chris Smith of Pennard Plants (12). There was also a screening of some film clips from an upcoming film on seed saving – ‘From Seed to Seed’ (13) – by Nicholas Bell and Martina Widmer.

As mentioned on the Seedy Sunday programme, the whole event has recently been under threat by the proposed, though currently politically dead, EU regulation on Plant Reproductive Material (14). Last year saw a dramatic increase in the number of seed campaigns across Europe as a reaction to the legislation, with the result that, dire as the consequences of the regulation would have been in terms of biodiversity of our ecosystems and freedom of our people, it at least encouraged many more people who were otherwise unaware of such issues to take an interest in them. For more on the proposed regulation, you can see my article from last year here and a more up-to-date one here.

Though the PRM regulation is politically dead for now, the laws of the United Kingdom and indeed of Europe and much of the rest of the world are still far from accommodating when it comes to seed saving on anything less than an intensive industrial scale, and to discuss these issues we had Ben Raskin from the Soil Association with a talk entitled ‘Why does the European Union keep trying to interfere with our seeds and what can we do about it?’

Such issues are important to maintain an awareness of if we wish to keep saving and exchanging seeds. Of equal importance, however, is the celebration of these activities as a celebration of life itself. That Seedy Sunday is held at the same time as Imbolc is no accident: this is the time when life begins returning, symbolically and also physically. I heard many Seedy Sunday-ers commenting throughout the day that they feel as though they are just beginning to wake up after spending the wintertime ‘almost asleep’: such feelings are characteristic not only because of the grim damp greyness which is the British winter but simply as a manifestation of the cycle of life. For many who attend Seedy Sunday the day is just as much a social occasion as it is for business; and to add to the air of festivity we had the Acabella choir singing periodically throughout the day, with a capella songs about plants, trees and growing.

Even the Corn Exchange decor can be seen as fitting to the event. Photo by Charlotte Haworth

So begins a new season: seeds, singing and socialising. Now is the time to start planting the seeds we have gained; both physically in the garden, and metaphorically as well. I trust all who attended Seedy Sunday this year had a thoroughly enjoyable day; any who missed it, why not consider attending next year, or, if you do not live in Brighton, finding your own local seed swap event. If there are none in your area, you may wish to consider starting one. Why not? Seedy Sunday may be the largest seed swap in the country but the whole thing is organised by a committee of just nine people, (including the newest member, me) who are all volunteers. If we can do it, you can as well!